Due to inclement weather, the Nottoway Indian Tribe powwow was relocated to the Surry Recreation Center. When the sun returned–appropriately–on Sunday, the event returned to its outdoor venue. As the ceremonies commenced, the arena director, Leroy Hardy, welcomed the crowd. Hardy was followed by John “Blackfeather” Jeffries. As Master of Ceremonies, Jeffries delivered the opening statement, followed by a procession of color guards — arayed in multi-hued traditional dress — led by the Nottoway chief, Lynette Allston of Capron.

Previous to the dawn of the 17th century, the Nottoway — an Iroquoian language-speaking native people — lived quietly along the Virginia-North Carolina coastal plain, and relatively isolated from the Jamestown colony which was settled in 1607. Once visited by the English explorer, Edward Bland, the Nottoway were subject to encroachments upon their land by Europeans. 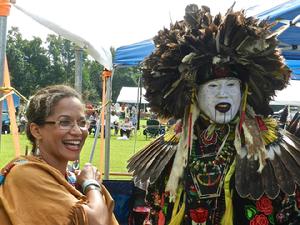 Following a rebellion of frontiersmen led by Nathaniel Bacon against the colonial governor in 1676-77, the settlers and natives signed the Treaty of Middle Plantation. Later, the Spotswood Treaty, formally establishing the relationship between the Virginia colony and the Nottoway tribe, was agreed to. Times being what they were, the Nottoway peoples were subsequently restricted to a 44,000-acre parcel on what are now the towns of Courtland, Sabrell and Capron.

The weekend’s PowWow represents an annual tradition that includes inter-tribal dancing, storytelling, educational displays, arts and crafts, Native American cooking and information for the greater community. Drums play a central role in the rituals surrounding each powwow and this year’s drummers were from the Yough-Ta-Nund and Na-Ma-Wo-Chi tribes. In keeping with this broader native American theme, Aztec dancers from Mexico were also part of the program.

While the PowWow remains a highlight of the Nottoway year, the tribe keeps busy in other ways, as well. One example is environmental stewardship. As active participants in the Blackwater Nottoway Riverkeeper Program’s Clean Rivers Day, tribal members cleaned and beautified the banks of their namesake, ancestral river, the Nottoway. This program has been recognized by the National Wildlife Federation.

Meanwhile, Chief Lynette Allston and other leaders continue to educate the community about Nottoway history and traditions through appearances at university forums as well as public and private schools throughout the region. Other avenues to promote a larger awareness of the Nottoway tribe is publishing. The Virginia Nottoway Circle and Square Foundation makes two books available to the public. The first volume of “DoTraTung”–New Moon is an academic history of the Nottoway tribe. The second book, Untchore (meaning “to eat”), focuses on the food, agriculture, hospitality and place of women in Nottoway culture.

The Nottoway Indian Tribe of Virginia received formal state recognition on February 26, 2010. The Commonwealth adopted criteria for recognition very similar to the United States Department of the Interior Bureau of Indian Affairs. Of the eight recognized tribes, the Nottoway is alone in having submitted a fully documented petition, along with an exhaustive set of supporting documents. Recognition allows tribal representatives a say in the Virginia Council on Indians. 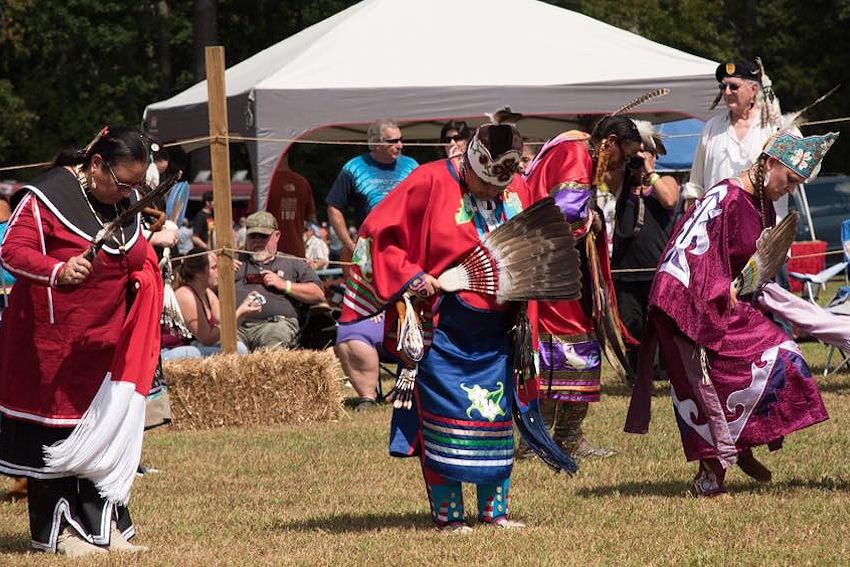 Hosting the PowWow was the Surry Recreation Center. As part of the Surry County Department of Parks and Recreation, the facility is available to all county residents for various events and activities on the condition of proper registration. Space and times are reserved on a first come, first served basis. In compliance with the Americans with Disabilities Act, the center is fully accessible, offering abundant parking and restroom facilities to users. It serves as the regular setting for the Nottoway PowWow, providing adequate space whether inside or out of doors. Next year’s gathering is already in the planning stage.