The city of Franklin now has a gaga pit, and no, it has nothing to do with the famous star called Lady Gaga. Instead, this curious-looking fenced-in court can now be found at the James L. Camp Jr. Family YMCA in town.

So you may ask, what is a gaga pit?

Southampton High School senior Brandon Fenters could tell you all about it because he was the force behind the construction of the recreational pit. He collected all the information needed and the construction details and built the gaga pit along with his fellow Boy Scouts. Fenters came up with the idea, and it was one of the last phases to earning his rank as an Eagle Scout.

The ranking of an Eagle Scout is the highest achievement for a member of the Boy Scouts of America, and less than five percent ever reach that accomplishment. For a Life Scout to become an Eagle Scout, he must have earned a total of 21 merit badges. 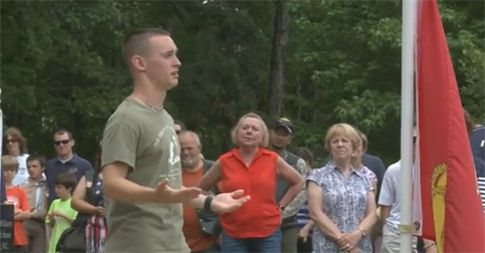 Fenters decided on the concept of a gaga pit even though very few have ever heard of one. When he had attended camps in the past, there were gaga pits available, and he figured that the local YMCA could possibly benefit by having one constructed. Fenters approached the powers-that-be about the idea, and the director and others agreed with the addition of a gaga pit located in an area of the Y’s fields.

It’s an octagonal-designed area that features, in this case, wooden fencing around it. The grass is still present inside the pit.

A gaga pit is centered around a high energy game played in the pit with a soft-foamed ball. The activity is like dodgeball, and players keep moving to avoid getting hit by the ball. If the ball strikes you below the knee, you’re out.

Once the ball is in play, any player can whack the ball with an open or closed hand.

The octagonal fencing (walls) can also act aa an aid in jumping.

These are basic rules, but the game of gaga can be played in a variety of different ways. 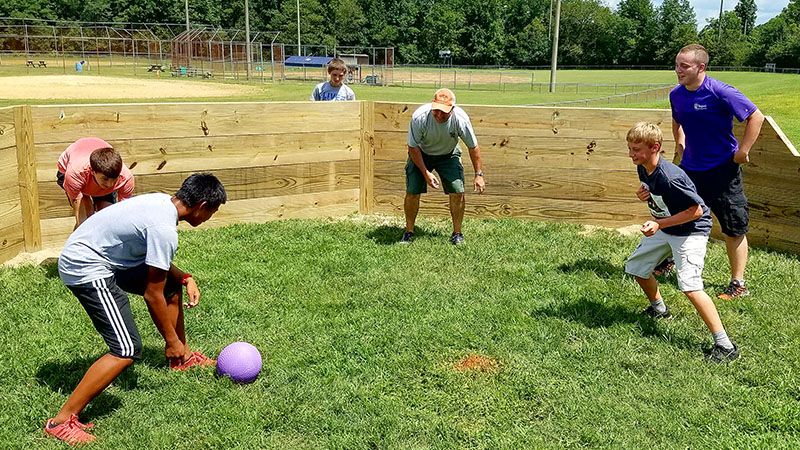 Fenters had a plaque made that is nailed inside the pit. He had the universal rules of the game and how to play it written on the plaque to help folks learn the game. For many, this is the first time they had been in a gaga pit to play the sport of gaga.

So far, it’s been a major hit, so to speak, for those who frequent the YMCA. The pit is seeing daily use, and it’s considered a recreational asset to the city.

Brandon Fenters has been a Boy Scout since 2011 and has worked his way up the ranks. He is now proudly an official Eagle Scout following his review board on Tuesday evening.

It was a project with much attention to detail, and the gaga pit concept took Fenters a lot of hard work and commitment to see it through. For example, his plan had to be of benefit to a non-profit organization in the community. He also needed the thumbs up from the Colonial Council to proceed, and he had to lead his Scouts in the project and bring it to completion.

That was not all. Fenters had to gather the supplies and even use his own pocket money to ensure all the materials were present. Troop 17’s annual spaghetti dinner also helped in the funding.

Fenters’s application sailed through the proper channels with the Colonial Council, and the paperwork was then sent to national.

Thanks for the gaga pit, and congratulations, Brandon Fenters.